Lil Kenny is a transported to the Otherworldly Lining with a side of memory loss and is brought to become a Summoner of the World of RNG.

There's a notable theme of bright obnoxious colors in his clothing. The red jacket and darken red jeans. The jade beanie and under jacket that shines like a highlighter. There's also the weird light capri cloths round his padding, belts and bandana. the only notable dark spots are the lower part of the jacket, the shoes, the hilt of the crescent sword and the his black-green gradient colored hair.

In the beginning of his journey, he is shown to be cautious, unsure and in doubt. He doesn't want to hurt anyone and vaguely remember his normal life in which he was carving pumpkins and drawing stickmen figures. Scared but resilient as there is no other way forward.

It appears the Lil Kenny does not full remember his real name when transported to the Otherworldly Lining and into the world of RNG. It is hinted by Faerie Gris that there seem to be a deeper meaning on why he regressed back towards childhood. As he is brought into this new world, maybe he'll learn something about himself. 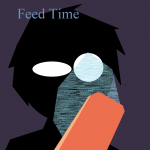